In this article, you will see boosting statistics that describe this niche in the gaming industry.

In fact, we are going to look at some findings from ScienceDirect about rank deception and add some insights from our professional boosters.

What is Boosting in Gaming

Giving a game account to an expert to artificially and rapidly enhance one's competitive ranking is known as boosting.

This type of service has become more available in recent years, and we wanted to provide you with information that nobody really talks about. 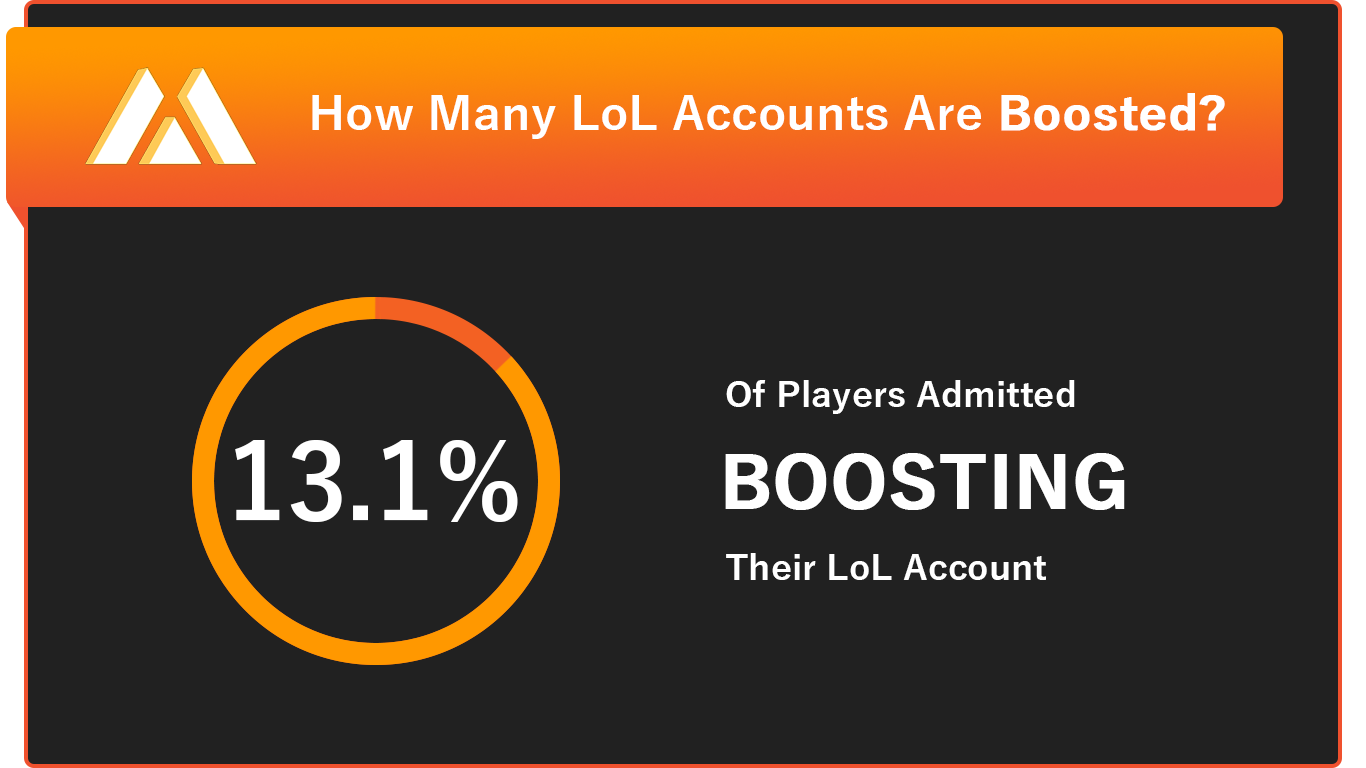 Koskinas, a senior member of Riot's anti-cheat team, published a developer article regarding the state of boosting in LoL.

His team discovered a clear connection between the amount of detected boosting and the deadline for in-game rewards for ranking positions.

It means that most players are using boosting services only to hit a better-rewarded rank. So for the League of Legends, it would be Gold IV, Plat IV, and Diamond IV.

And it’s pretty reasonable when you need just a little push to climb into the higher rank. The help from an expert is always needed in every industry, not just in boosting.

The LoL’s team also predicted the number of accounts that were boosted only to claim ranked rewards. Let’s take a closer look. 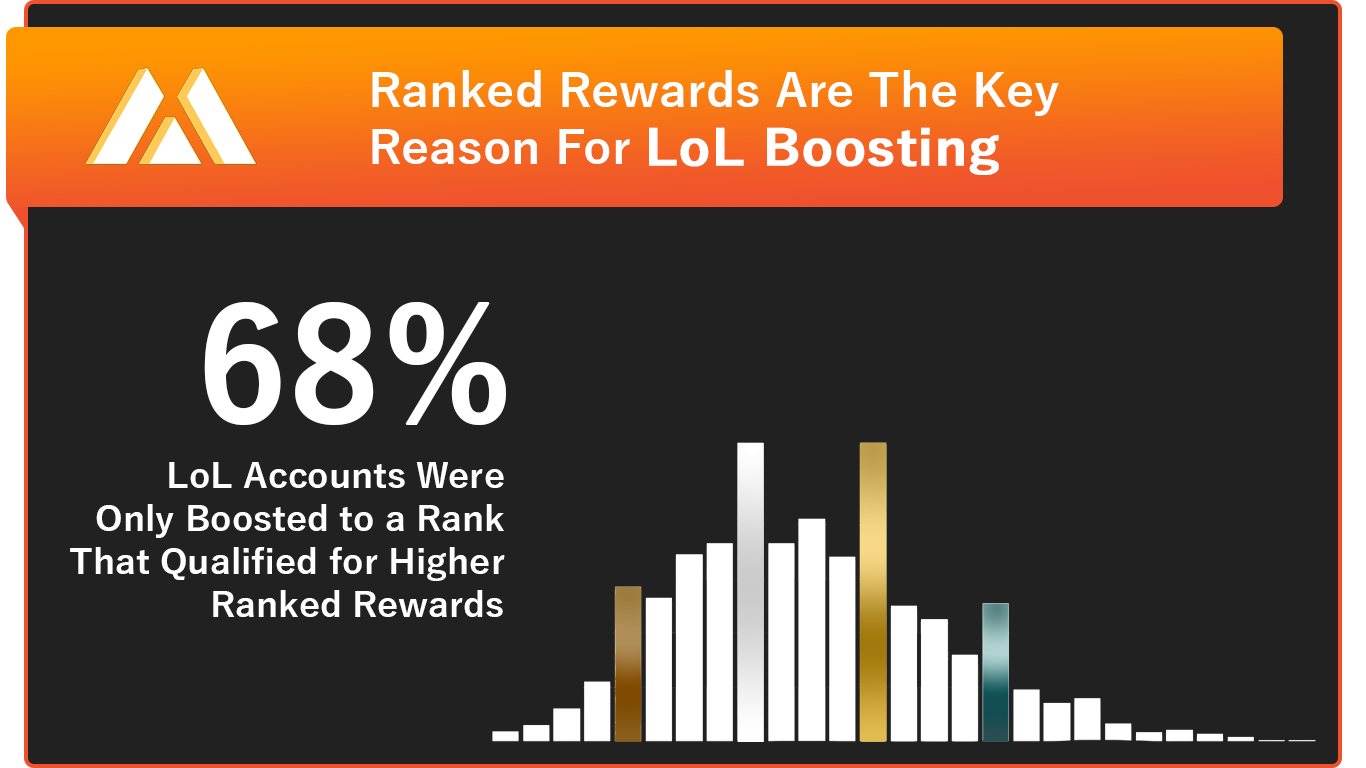 This prediction is the best that we have because it’s hard to get the right number. People subconsciously believe that boosting is a bad thing and don’t want to admit using it.

The idea of boosting in order to obtain in-game incentives has also been observed in other competitions.

Such as Dota 2, where the introduction of awards for obtaining a rank of Ancient 7 resulted in an unusual amount of accounts being registered at this level in season 3. 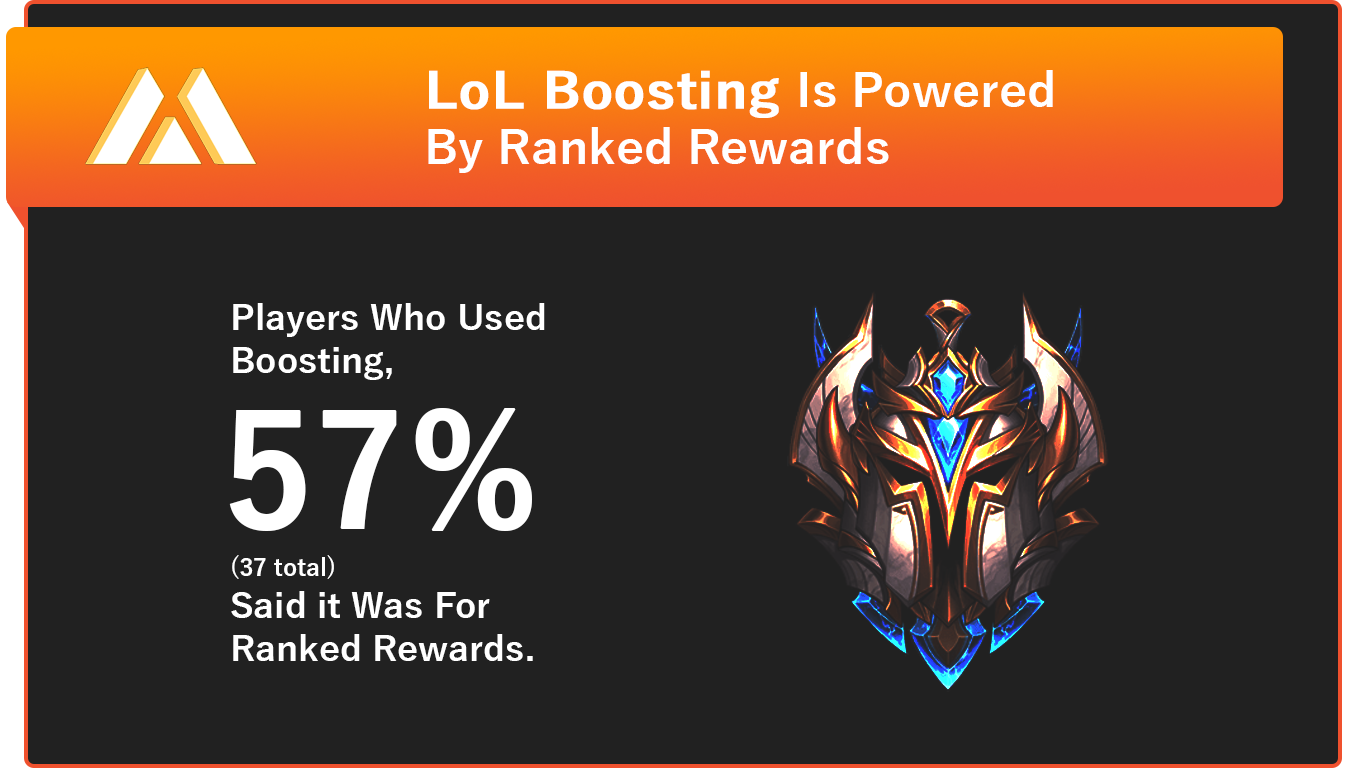 So it is absolutely clear what the intent behind the boosting is. Players want to be rewarded not only with higher status, but also with in-game rewards.

It is known that boosting is a better alternative than grinding the ranks by yourself.

In fact if you do the math, it’s probably better for you in terms of time efficiency to work for a minimal wage and spend the money on boosting than to climb with your own skills!

Many of the boosters are underpaid and we will get to that later in this article. 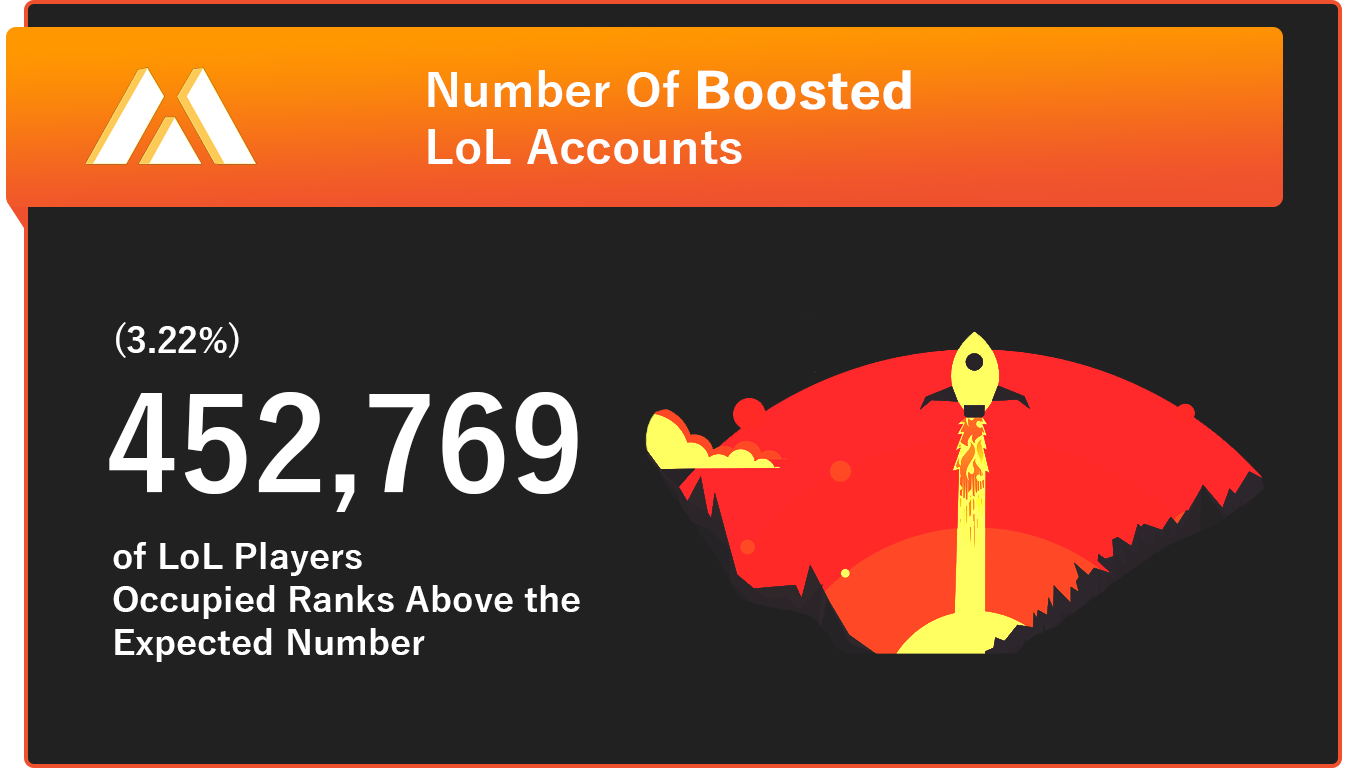 Players simply love it, but what boosters say about their job?

They are “looking for some good time while getting paid a little.” 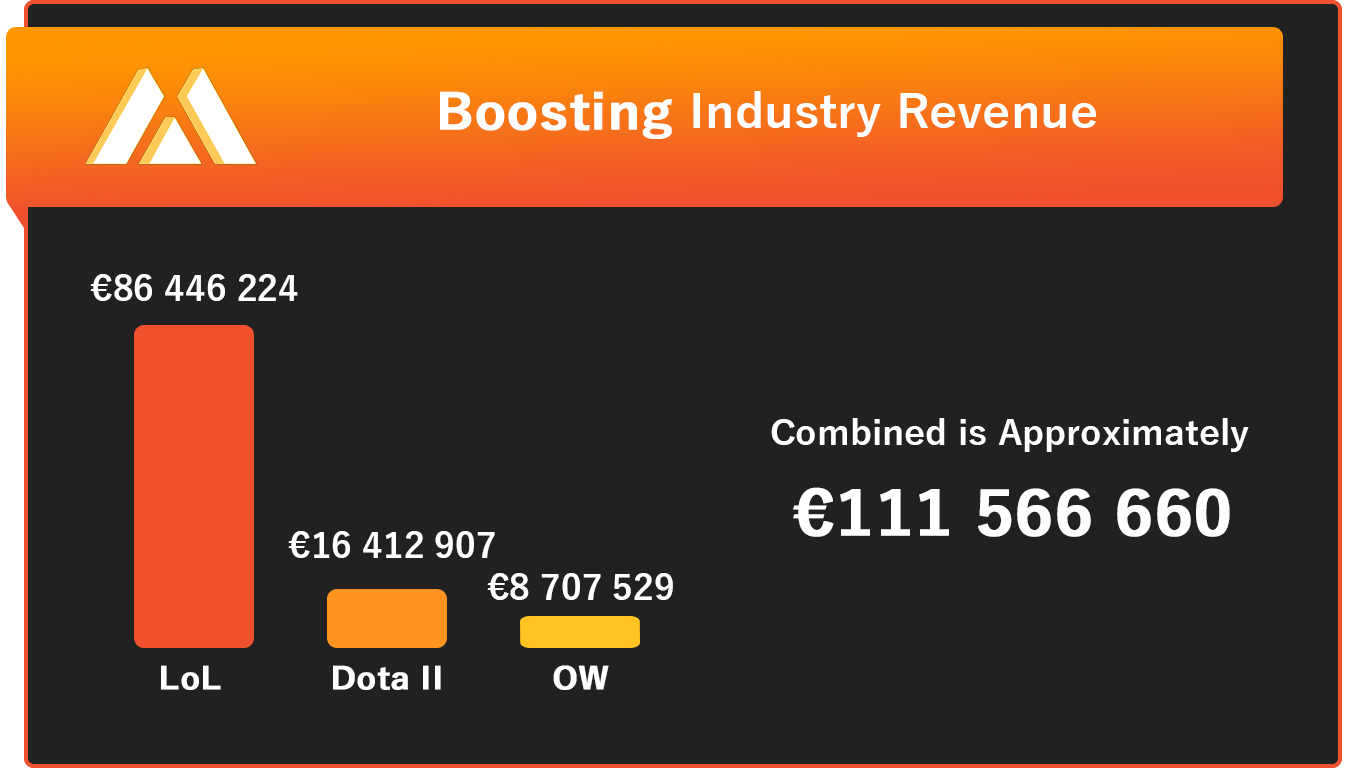 This sounds like a lot, but when you break it down, and count in the platform provisions where boosters seek work, the average booster salary is $5 per hour by the rule of thumb.

That’s why most of the boosters are from weaker economies and they also have to have supplementary income in order to make a decent living.

#6 18.5% of Respondents (265 total) Think Boosting Has no Negative Impact on the LoL Community 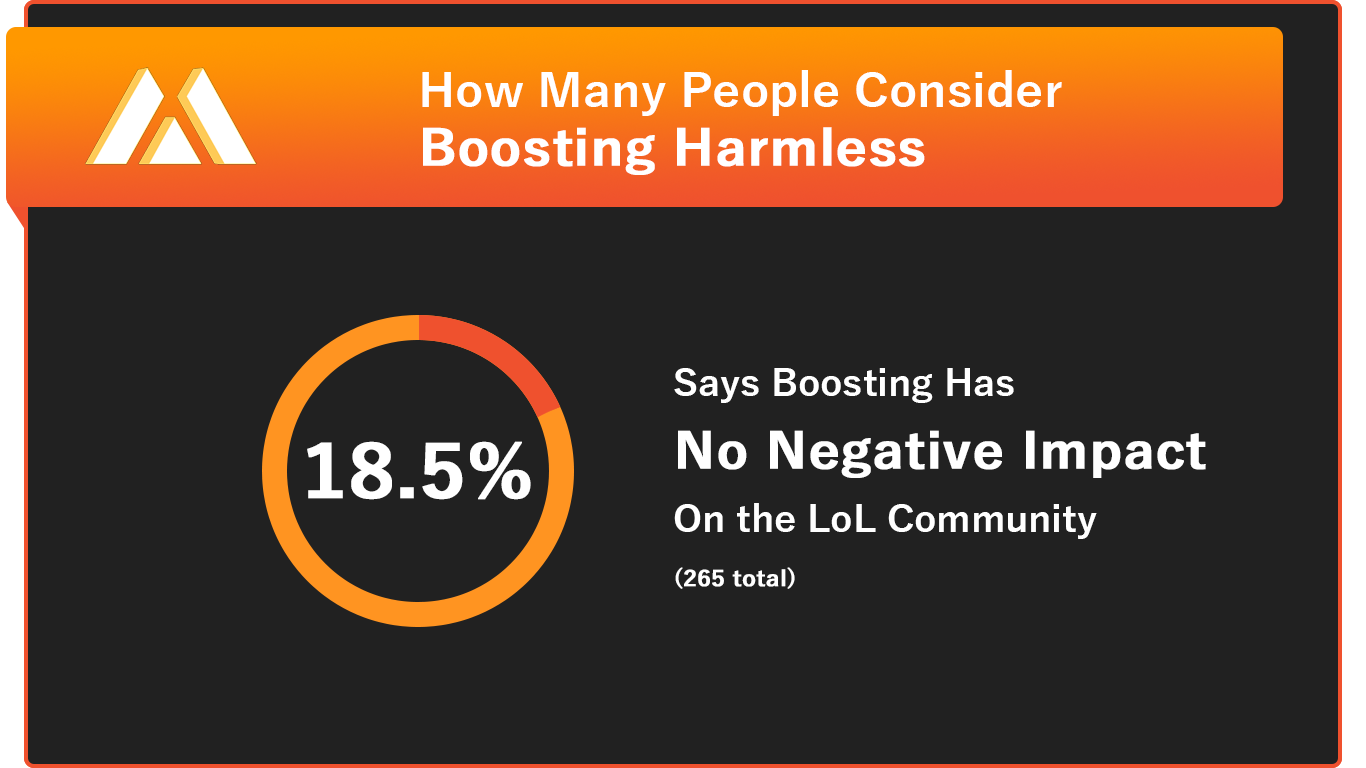 Gaming and boosting communities have a huge impact on the games and how they are played. People are discussing whether it is good or bad and we think that it is simply natural.

The gaming is mostly for the younger part of the population, so you have to take advantage of your capability while you can!

Although competitive computer gaming has been around since the days of high scores on arcade machines like Pac-Man, the way we interact with video games today is becoming increasingly more complex.

Esports careers commonly end before players turn 25, as this age is associated with a deterioration in reaction time performance.

But Boosting Can Also be Benefitial

The general idea is that boosting is bad - the players seem to hate it, but we have shown you how many of them are actually using these services. And boosting even makes it possible for many people to make money doing what they truly love.

The game producers are trying to limit it every day. But there is a reason why it exists in the first place. And that is to be better or at least look better.

Where does this feeling come from? We will let you wonder.

But if you want your rank boosted and rewards claimed, be sure to check out our services and look for a discount code - it is hidden somewhere on our website!

Today Boosting Market brings you the new update for Call of Duty: Warzone just went live this weekend and finally something the playerbase have been...

LoL Worlds 2021: All the teams that qualified for the Playoffs

This year group stage was a banger! One of the best in recent history of&nbsp;League of Legends&nbsp;World Championships. Only eight teams from the 16...

Valorant vs Rainbow Six Siege vs CSGO what is the best game for boosting?

Thousands of people leave elo hell daily with Valorant Boosting, R6 Boost and CSGO Faceit boosting but few know from the booster perspective what it...